Hurtling down The Death Road on a mountain bike has become a bucket-list item for international thrill-seeking adventurers, with hordes of tourists descending the 60 km road in Bolivia’s subtropical South Yungas region every day.

Above of else, the tour has become so popular for the road’s morbid reputation. In its heyday, some 300 people a year died on the treacherous route, which was also the site of Bolivia’s most tragic road accident when a bus plunged over the edge in 1983, killing over a hundred people.

A 1994 study by the Inter-American Development Bank declared the road to be the most dangerous in the world which spawned the unenviable moniker – El Camino del Muerte (The Death Road).

In 2006, Bolivia constructed a new road to give safe passage to the hoards of Paceños who visit the nearby weekend retreat of Coroico. The new road is fully paved and double-laned with modern, first world features such as guard rails, tunnels, water drainage and mudslide fortification. Since it’s completion, vehicle traffic on the old Death Road has slowed to a trickle, meaning that the project has undoubtedly saved hundreds of lives per year. 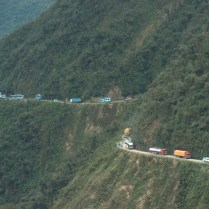 Death Road tours leave La Paz around 7 a.m. and travel two hours uphill to La Cumbre. At 4750 m above sea level, this is a high mountain pass that literally takes your breath away. The ride begins on an easy 20 km a stretch of wide, asphalted road through stunning high altitude scenery, which is a great opportunity for riders to get a feel for their bikes and prepare themselves for what’s to come. The real challenge begins when reaching the intersection of Unduavi.

Here, riders embark upon the true Death Road — a steep, narrow, rocky, single-lane gravel road where riders must contend with oncoming traffic and sharp jagged rocks along a deadly precipice up to 900 meters high. There are no guard rails anywhere, a fact made all the more ominous by the frequent sightings of gravestones along the route, some of whom were fellow cycling tourists. Scariest of all, road rules mandate that those travelling down hill must use the outside lane, therefore most of the trip is ridden precariously close to the cliff edge.

The tour is as popular for its stunning scenery as it is for its adrenaline rush and boasting rights. Those who make it to the bottom alive get to enjoy a swim, a big lunch, a few beers and put on the obligatory “I survived the Death Road” T-shirt.

How to actually survive the Death Road:

While reliable statistics are impossible to find, most sources agree that at least 20 tourists have died on the Death Road since tours began in the mid 1990s. This sounds horrific, but it’s not really that bad when you consider how many people do it. Some 25,000 per year, to be more precise.

Many have died simply because many have done the tour, so your chances of survival are actually pretty good. In fact, it’s reasonable to say the average Bolivian bus journey is more dangerous than cycling down the Death Road. Having said all that, a rider can mitigate their risk by taking some common sense precautions.

To ride the Death Road, travelers must arrange a tour from one of many La Paz travel agencies. Given the inherent dangers, it’s a good idea to go with a reputable company such as Gravity Bolivia who were the first to offer the tour and have been running it daily since 1998. With a strong focus on safety, they are widely considered to have to best equipment and training for their guides.

A full day tour including transport, guides, lunch and all equipment costs about US$110. Those on a really low-budget might consider opting for a cheaper company who offer similar inclusions for as little as half the price. Be warned however, safety and quality vary immensely in Bolivia and you tend to get what you pay for. Nevertheless, I did the tour with the El Solario agency in 2010 for US$50 and lived to tell the tale.

Harry is a freelance writer based in South America who writes about travel among numerous other things.
View all posts by Harry →
This entry was posted in Travel and tagged Bolivia, Camino del Muerte, Death Road, Expat, La Paz, Travel, World's Most Dangerous Road. Bookmark the permalink.