Wonderkid Makes Robots out of Rubbish

A teenage genius from a remote and desperately poor Bolivian town became internationally famous this year for his ability to create robots out of rubbish. Just to be clear, we’re talking about awesome, fully functional robots made from actual trash which he found at the garbage dump. 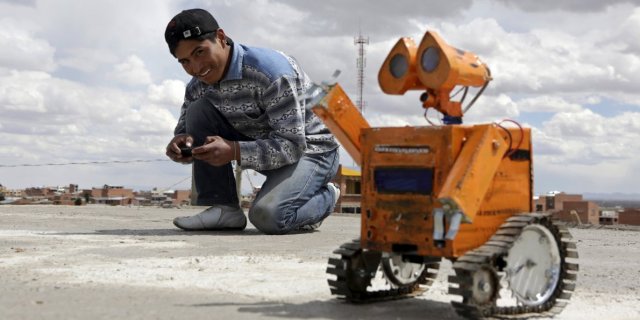 The genius of Patacamayma. source: businessinsider

Esteban Quispe, 18, comes from an impoverished family in Patacamayma, a dusty crossroads town on the desolate high Bolivian plains some 100 km southeast of La Paz. His parents first noticed his creativity at an early age when he used to mimic the creations of his construction worker father. By age nine, he was creating intricately designed toys out of scrap and selling them on the streets or at the local market. This extra money was enough for his mother to pay for the necessary books to keep him at school.

Esteban is completely self-taught. As one might expect, there was no advanced course in robotics at his underfunded, rural Bolivian high school. Everything he’s learnt has been from books or online research. 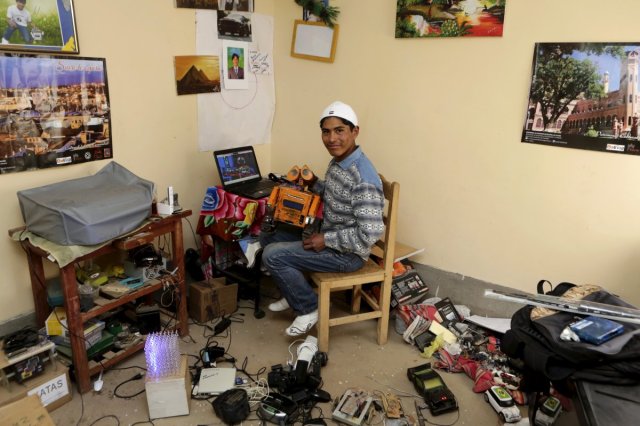 He was first inspired to create robotics as a way to look after his family. His father suffered from a chronic back injury and could no longer work so Esteban looked into building a robot that could automate the jobs of local potato farmers in order to secure a steady source of income. He hasn’t quite gotten there yet but his signature creation, a replica of Disney’s WALL-E robot, is nothing short of incredible. The robot looks just like the Disney version and is able to predict and evade difficult terrain as well as move its arms and head on command. All of this is controlled through an Android application which Esteban made himself.

Esteban visits the local rubbish dump every week with his younger brother and spends several hours sifting through discarded e-waste trying to find anything useful. It would obviously be much easier for him to just buy the parts he needs, but unfortunately this is well beyond his financial means.

Is that an Iphone 5S? source: BusinessInsider

“It’s not ideal, but the dump is the only place where I can find materials without having to pay for them. Using new materials would be better but I cannot afford them,” he says.

He also likes the idea of recycling and seems intrinsically aware of the environmental problems that face Bolivia and the rest of the world. Surprisingly, however, he was unaware of the health dangers associated with long-term landfill exposure until a foreign reporter brought up the issue.

“[They] told me that collecting e-waste directly from the dump is dangerous for my health because of contamination and air pollution,” he says. “I did not know these things before. I now try to be more careful, but there is not much I can do to reduce risks. Not coming any more would be the answer but I do not want to do that.”

Aside from WALL-E, Esteban’s made over 20 other cool gadgets such as a remote control car and a 3D image-projecting LED cube. Many of these have been sold off in order to support his family.

When news broke of the “genius from Patacamayma” in early 2016, he became an overnight celebrity. Up to 50 media organizations called each week for interviews including the likes of CNN, Al Jazeera, Fox News, and Telemundo among others. With his new found fame (and a string of paid invitations) he traveled around Bolivia to speak with rural school children to inspire them to follow their dreams. He even made it as far as Washington D.C to speak at the prestigious Demand Solutions conference.

Back in Bolivia, Esteban accepted a fully paid scholarship at one of La Paz’ best private universities to study electronic engineering. His classmates described him as an easy going yet hardworking student who dedicates himself entirely to his studies. However, after only six months he dropped out of the course and returned home to Patacamayma to support his family and hometown.

So what’s next for the genius of Patacamayma? The world really is his oyster. He’s received invitations to visit various prestigious institutions such as Google and Ivy League universities and even got a job offer from a Colombian firm that promised a yearly salary of US$250,000 right off the bat (only about 1000 x the Bolivian minimum range). Yet, for now, Esteban remains in his modest little hometown to take care of those closest to him.

Harry is a freelance writer based in South America who writes about travel among numerous other things.
View all posts by Harry →
This entry was posted in living and tagged Bolivia, disney, genius, inventor, La Paz, pachacamaya, robot, tech, technology, wall-e, Wonderkid. Bookmark the permalink.