More social unrest has been brewing in Bolivia over the last month. This time a group of some 150 disabled protesters have marched 386 k.m. all the way from Cochabamba to confront Evo Morales’ government in La Paz. The march took the determined group over a month, many of whom made the grueling journey on wheelchairs and crutches which was so demanding it led to numerous hospitalizations.

The protesters, who suffer from various mental and physical disabilities, are demanding a monthly stipend of 500 BOB (US$72) which they claim is a reasonable request considering they are unable to work to provide for themselves due to their disabilities. Current government handouts are a measly US$144 per year, meaning the new amount would be a six-fold increase.

The movement began to gain momentum in Cochabamba when several protesters hung themselves from a bridge in their wheelchairs to bring attention to the cause. This attracted the attention of Bolivian/Australian filmmaker couple Dan Fallshaw and Violeta Ayala (from The Bolivian Case) who continue to document the movement. A crowdfunding campaign has raised several thousand dollars as support continues to grow.

The Morales government flat out rejected their proposal stating budget concerns but said he is happy to open a dialog with the protesters.

Upon arriving in La Paz, the protesters set up camp in Plaza San Francisco where they were greeted by a large mob of local supporters. So far, confrontations in La Paz have been tense but relatively peaceful. Nevertheless, the government has barricaded off Plaza Murillo (the site of the presidential palace and focus point for violent demonstrations) and deployed scores of riot police including La Paz’ infamous anti-riot APC which is equipped with a powerful water cannon. A little over-the-top perhaps, considering the majority of the protesters are in fact disabled. 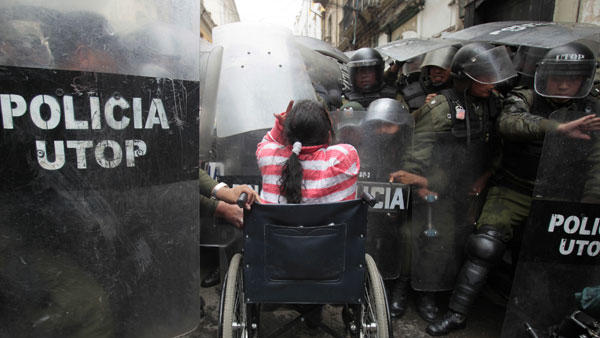 Negotiations between the government and disabled protesters are yet to eventuate.

As one might expect, the protests have begun to escalate, with reports of violence and dirty tactics from both sides.

According to the Violeta Ayala’s Facebook page, the police have been riding their motorbikes in circles around the disabled protesters campsite at night in order to deprive them of a good nights sleep. She also makes claims of police brutality, including the unnecessary use of pepper spray, manhandling and the detainment of disabled protesters. 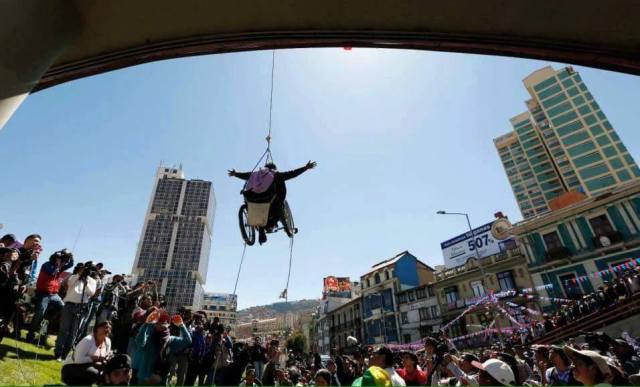 Protester in a wheelchair hanging from a pedestrian bridge in downtown La Paz. source: Violeta Ayala.

Meanwhile, the protesters have stirred up some controversy of their own. Last week Erbol, a Bolivian online news source, reported that one of the movement’s top leaders threatened to radicalize their methods by crucifying their children, stating “the children would prefer to die by crucifixion than to die from lack of medicine”. Fortunately, until now no children have actually been crucified on the streets of La Paz. Protesters claim the quote was completely fabricated by the government in order to tarnish their imagine.

Thankfully, this is as close as they’ve gotten to a crucifixion.  source: Violeta Ayala

The group are now threatening the more moderate method of blocking La Paz’ teleférico to bring attention to their cause. This is still a risky move, however, that is likely to lose a lot of local support. The people of La Paz hate nothing more (child crucifixion notwithstanding) than outsiders coming to their city to protest and causing havoc on their transport system, something that is an all too common occurrence.

So why doesn’t the government just give them the money?

Bolivia still enjoys strong economic growth despite recent falls in its most valuable commodities, so it’s fair to say the monthly US$70 per person could probably be found somewhere. Essentially, the problem is the government doesn’t want to look weak. If they cave into the disabled protesters now, then soon the elderly will be asking for more, as will single parents and miners and so on. The government really should have tried to make a less expensive agreement with the protesters before they marched all the way from Cochabamba.

Harry is a freelance writer based in South America who writes about travel among numerous other things.
View all posts by Harry →
This entry was posted in politics and tagged Bolivia, civil unrest, disabled, Evo Morales, government, La Paz, politics, protestors. Bookmark the permalink.